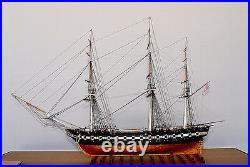 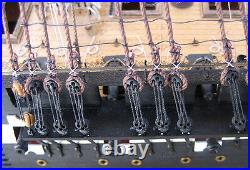 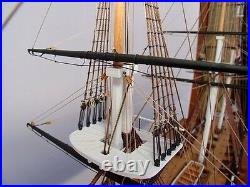 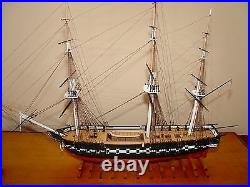 The USS Constitution is a 44 Gun Frigate originally built in 1797. The scale is 1:96, using plank over frame building techniques and depicts the USS Constitution as it appeared after the 1865 refitting. Approximately 350 hours were necessary to construct the model which was completed in 1978. Peter Bauer III, the builder, died on October 26, 2016. The music for the Star Spangled Banner is provided courtesy of the US Navy Band Sea Chanters. Additional provenance has been supplied by the Charlestown Navy Yard inside the Boston National Historical Park in Boston, MA. There is one other Peter Bauer hand constructed model in existence on display in the Navy Hospital at Camp Lejeune, NC. The item “USS Constitution part wood from original ship museum quality not a kit” is in sale since Monday, December 30, 2013. This item is in the category “Antiques\Maritime\Model Ships”. The seller is “montgomery4550″ and is located in Phoenix, Arizona. This item can be shipped to United States.