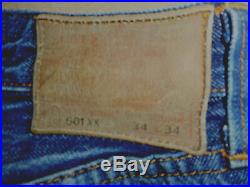 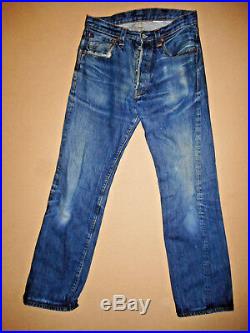 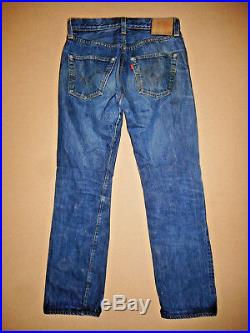 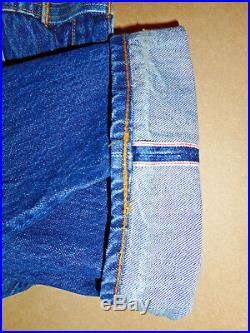 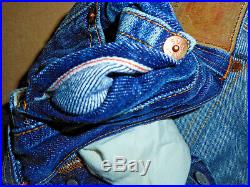 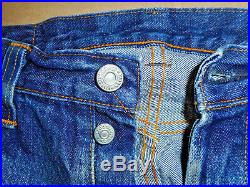 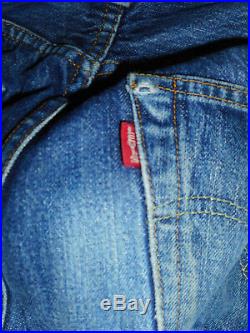 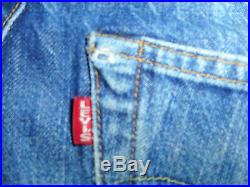 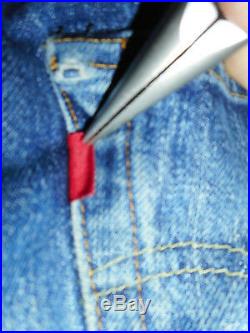 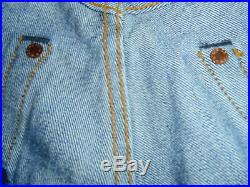 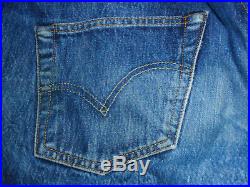 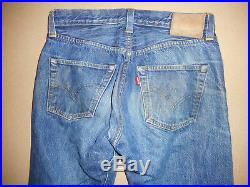 Levi Strauss BIG E Original 1940s Vintage 501XX Men’s Denim Jeans Selvedge Pocket These ultra rare original Levi big E’s were likely produced between 1947 and 1951-please see the indicators below which provide a guide as to how old the jeans are Features 1. These jeans have selvedge on the inside, which indicates that they are likely pre 1985. In the early to mid-1980s the use of selvedge denim was phased out due to productive efficiency, and the jeans produced in this era were finished with an overlock stitch on the outseam instead. There is no care label in the jeans, nor is it written inside the pocket this indicates that the jeans are likely pre 1971, when the care label was first introduced. Capital big E on the label indicates that they were likely produced before 1971 when the big E was changed to a small e. The leather patch, (with all the other features) indicates that the jeans were likely produced before 1954. V stitch near the button. This stitch runs from the top of the waistband to about a quarter inch below the waistband and then in an acute angle back up to the waist button, creating what looks like a V. This was a standard feature on 501s up until 1969. These jeans have the v stitch indicating that they are likely pre 1969. The back patch reads 501XX in large black letters indicating that they are likely pre 1966. Since nearly the dawn of the 501, a small watch pocket later dubbed coin pocket. Had been featured by the right-hand front pocket. This was originally sewn on with a visible selvedge detail showing from the inside of the pocket. This feature was discarded sometime in the late 60s (1966) according to examples from the Japanese book. If they do have a selvedge watch pocket your 501s are produced earlier than 1966. These jeans do have a selvedge watch pocket. These jeans also have hidden rivets on the back pockets- the rivets are not visible on the back of the jeans- only from checking on the inside. The concealed rivets featured here were first introduced in 1937 as a result of complaints that the non concealed rivets were scratching furniture and saddles. The concealed rivets were replaced in 1964 10. These jeans have Every Garment Guaranteed on The Two Horse brand patch. This text is sitting above the lot and size numbers and below the Two Horse-logo. The 501XX models only had this. Until around 1963 thus this pair is likely pre 1963. These 501’s have a leather patch which along with all the other features indicates that they were likely produced before 1954 when the leather patch was phased out. A single-sided Levis RED TAB indicates a 501 produced prior to 1951. These jeans have a single sided Levi RED TAB indicating, (with all the other features), that they are pre 1951. The diamond refers to the center of the arcuate where the two curves meet in a point. After the war, when the iconic 1947 501XX was released, the arcuate was stitched on with a double needle sewing machines that resulted in this little overlapping of stitches, often called the diamond by collectors and thrifters. The double needle technology eased the process of sewing the arcuate for the seamstresses who had been used to stitching the arcuate with a single needle, giving the pre-WWII stitched arcuates a different, slightly wonkier look. Single Stitching Thus, with all these points in consideration it is likely that these jeans were likely produced between 1947 and 1951. Waist 30″ – Inside Leg 30″ – hem 7.5″, rise 11″(all jeans are measured before listing to give an accurate size, so may be differ from the label) The leather patch has faded and shrunk, as expected with vintage jeans. There is wear to the pockets, both of the pockets are ripped but still usable. There is also wear to the pocket edges. The jeans also have light wear above the hems, but considering the age the hems are in very good condition. Comes from smoke and pet free home. All colours stated and condition are to the my best guesstimate and may vary slightly. Please take the time to browse my other items for many other brands including Armani, Hugo Boss, Levi, Polo, Diesel, Ted Baker and other styles and colours. I also have other big E’s including a few originals and a number of LVC items. Track Page Views With. Auctiva’s FREE Counter. The item “Levi Strauss BIG E Original 1940s Vintage 501XX Mens Jeans Selvedge Pocket E6″ is in sale since Sunday, December 10, 2017. This item is in the category “Clothes, Shoes & Accessories\Vintage Clothing & Accessories\Men’s Vintage Clothing\Jeans”. The seller is “cosmicdenim” and is located in Stoke-on-Trent. This item can be shipped worldwide.